University Circle is known as a world-class center of innovation in health care, education, and arts & culture. But more than two hundred years ago, it was known as Doan's Corners, after Nathanial Doan, a member of the Connecticut Land Company, who settled his family and started a community here. 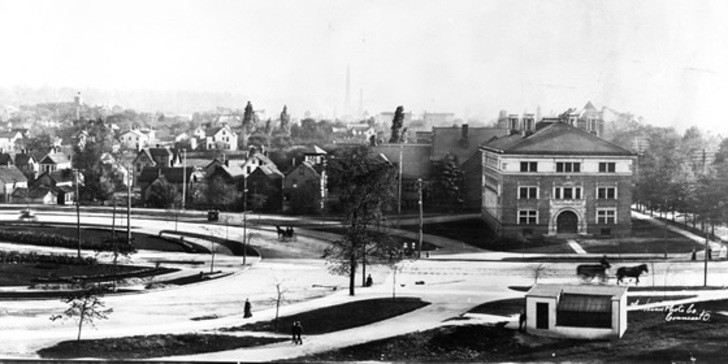 It started when two universities in Cleveland, Western Reserve University and Case Institute of Technology, were looking to relocate. They found this land four miles east of downtown Cleveland in a fledging community with enough open space to develop. Their relocation led to the birth of an educational center and the creation of a new community called University Circle, named in part after these new institutions but also the circular street intersection and traffic turnaround created at Euclid Avenue and Doan Brook Boulevard (Martin Luther King, Jr. Boulevard).

The arrival of University Hospitals in 1931 (founded in 1866) led to health care becoming another center of innovation in University Circle. Less than one mile away from University Hospitals, the Cleveland Clinic started serving its patients in 1921. The growth of the Circle as a center of innovation in health care, education, and arts & culture provided a foundation for a vibrant urban district along one of its major arteries. 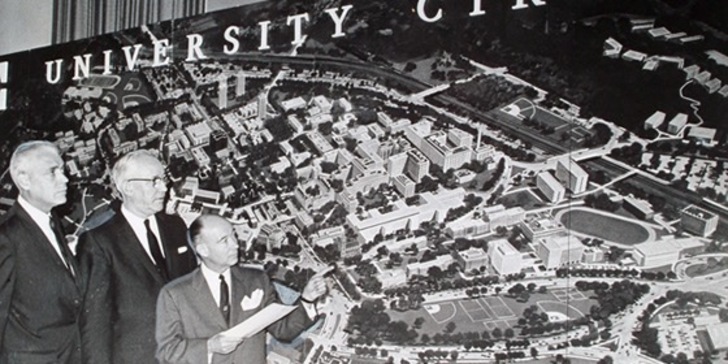 By 1950, 34 institutions had chosen University Circle as their home. But the new world-class center of innovation needed help with its growth.

Enter one of Cleveland's most spirited civic leaders, Mrs. William G. Mather, who recognized that University Circle was at a pivotal point. She wanted a master plan for the Circle and "more relevant relationships for the institutions." Her vision and generosity made possible the hiring of the renowned Boston planning firm of Adams, Howard & Greeley. After a rigorous 18-month study, the University Circle Master Plan was presented on the afternoon of October 15, 1957, to Cleveland City Council, the Cleveland City Planning Commission, and the Heart of Cleveland Development Committee. The plan gave direction for the Circle's orderly growth and reaffirmed that Cleveland had succeeded in creating the most impressive concentration of health care, education, and arts & cultural institutions in the country and in the world.

One of the most important recommendations made in the 1957 Master Plan of University Circle was to "establish a central organization to administer the plan and give it some real authority." With that charge and full institutional support, the University Circle Development Foundation (UCDF) was formed as a "service organization to all institutions." Initial efforts focused on creating a land bank to purchase and hold available land needed by institutions for expansion. Soon, services that could be provided more efficiently if done collectively - parking, shuttle bus service, public safety, architectural review, and landscaping of common areas - were added. The stability provided by these services gave new confidence to the institutions, and the Circle's growth skyrocketed. 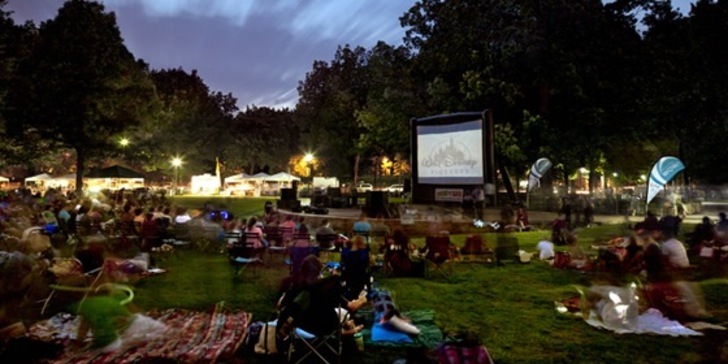 In 1970, UCDF was reorganized as University Circle Inc. (UCI) with an added emphasis on strengthening the relationship between University Circle and its surrounding neighborhoods. In its outreach to the broader community, UCI began working closely with neighborhood organizations to build housing and to provide access to broader community resources. UCI's Community Education Program was created in 1973 to bring the assets of the Circle to Cleveland schoolchildren.

The 1990 University Circle Master Plan, which updated the 1957 Master Plan, strongly reinforced the importance of neighborhood partnerships. UCI's reorganization moved it from simply being the "caretaker" of the Circle's physical environment to being a catalyst for development, an integral service provider, and an advocate for University Circle as a center of innovation in health care, education, and arts & culture.

UCI launched a Five Year Action Plan in 2007 to continue its aggressive push to build a safe, clean, and attractive neighborhood on the foundation of its University Circle anchor institutions and partner businesses for which it develops, serves, and advocates.

Missing fall in the Circle on this chilly day 🥲 https://t.co/gBXKYg7JCg

Start your weekend off right with a trip to three of our top museums using the CirclePass before heading over to The Rink at Wade Oval for some ice skating! https://t.co/00eiMbpiSa Proudly sponsored by @PNCBank 📷: Emily Metzger https://t.co/4I6efhdSOt

Okay who voted for winter? I just want to have a word. https://t.co/ZFGrcVkGQe

Tell us what you think!

What brings you to University Circle?

University Circle Inc. hosts many events and programs in the area. Food vendors, merchants, institutions and contractors looking to find opportunities can check this page for the status of applications.