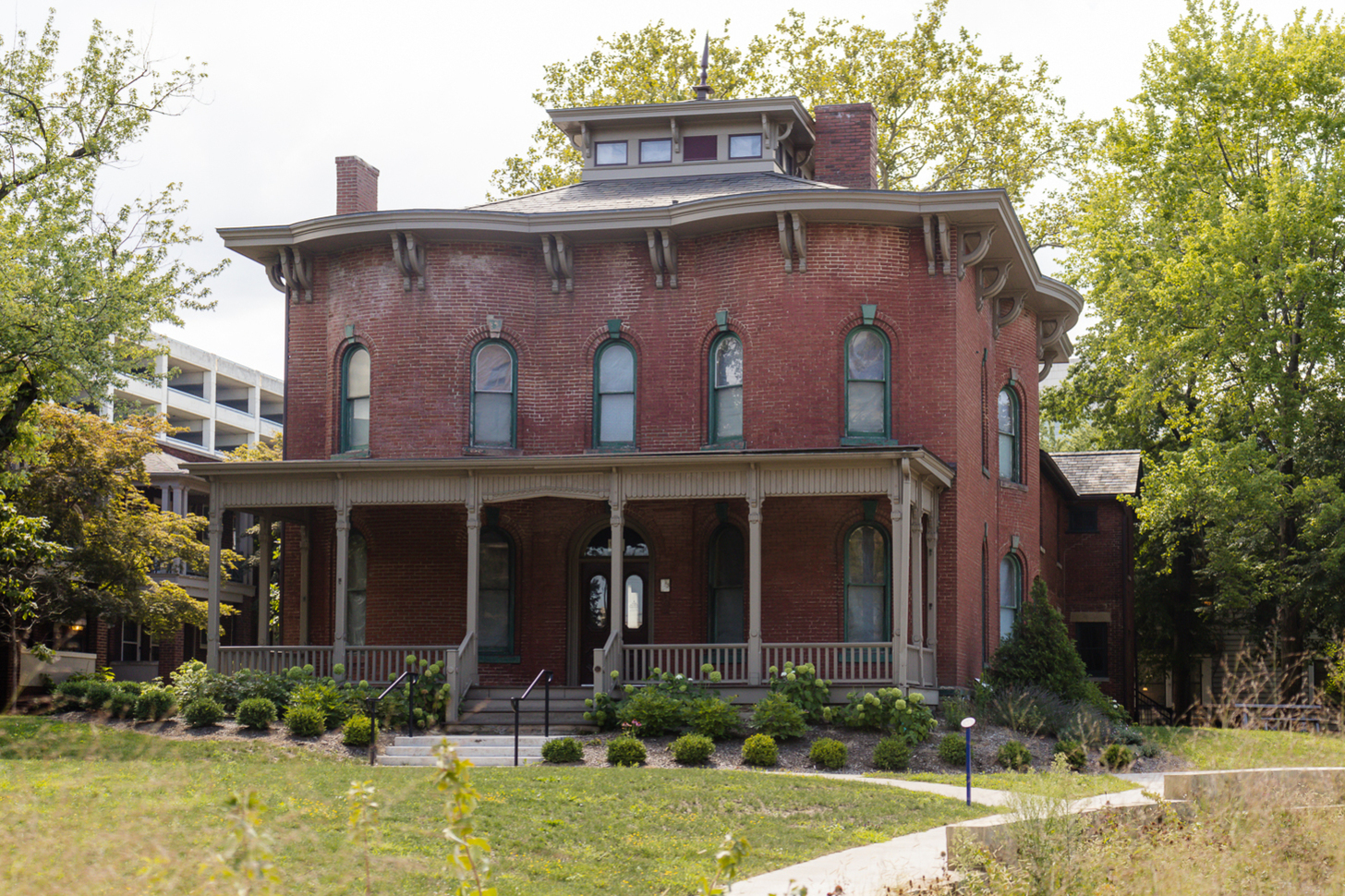 The Cozad-Bates House is the only pre-Civil War home remaining in University Circle. A new interpretive center, open Saturdays from Noon-4:00 p.m., highlights this area’s history as a center of anti-slavery activism and honors those seeking freedom through indoor exhibits and outdoor installations. 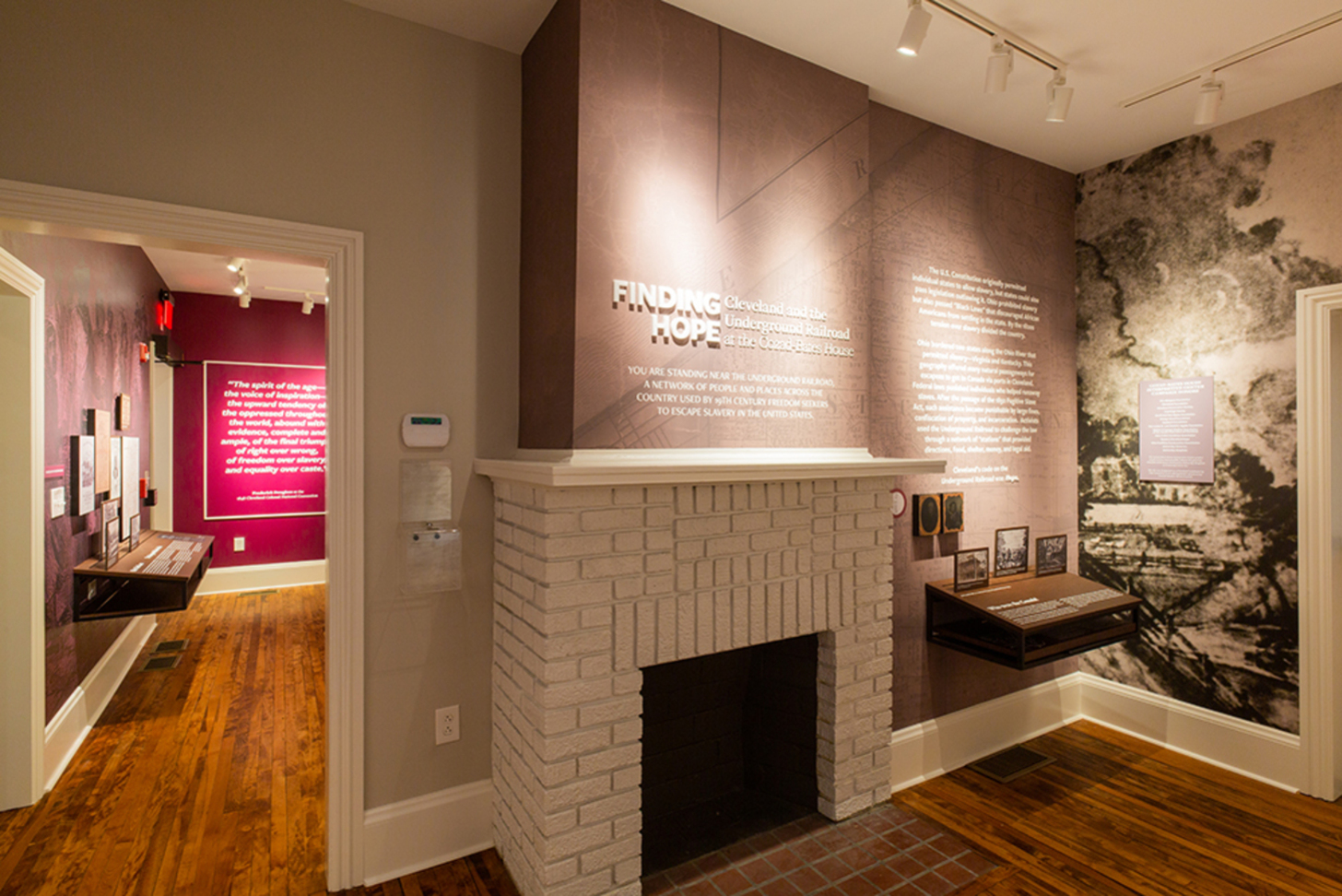 The Cozad-Bates House Interpretive Center adds a critical missing piece to the cultural offerings of University Circle and is integrally connected to the ongoing community education efforts of UCI and our partners.

The interior of the Cozad-Bates House Interpretive Center features exhibits in three distinct spaces, each with its own story and purpose: the Gund Foundation West Wing, Cleveland Foundation East Wing, and the KeyBank Community Room. The West Wing exhibits set both the national and local context for slavery in the years leading up to the Civil War. The East Wing highlights stories of local anti-slavery activists and freedom seekers, such as Sara Lucy Bagby Johnson, a Cleveland resident who escaped slavery only to be returned to Virginia under the Fugitive Slave Act. The KeyBank Community Room connects past to present with programming that outlines how the impacts of slavery are still seen in today’s social issues through an exploration of the 13th,14th, and 15thamendments developed by Case Western Reserve University’s Social Justice Institute.

The preserved front lawn of the Cozad-Bates House is a new cultural greenspace for University Circle, featuring an interpretive walkway that combines art and landscape to further highlight the people and places of the Underground Railroad network in Cleveland. Thoughtful features include educational signage shaped like the arched windows of the home itself. That signage is also indigo-colored, a reference to one of the staple crops of the exploitive slave economy. Many of the plants used in the landscaping are edible or carry medicinal properties that evoke the hope that the land itself might offer support to freedom seekers on their long and dangerous journey. Some plants are gnarled or spiky, reflecting a difficult history. The space will also host future community events, including the annual Restore Cleveland Hope Freedom Festival, which features inspiring theatre, dance, music and spoken word performances. 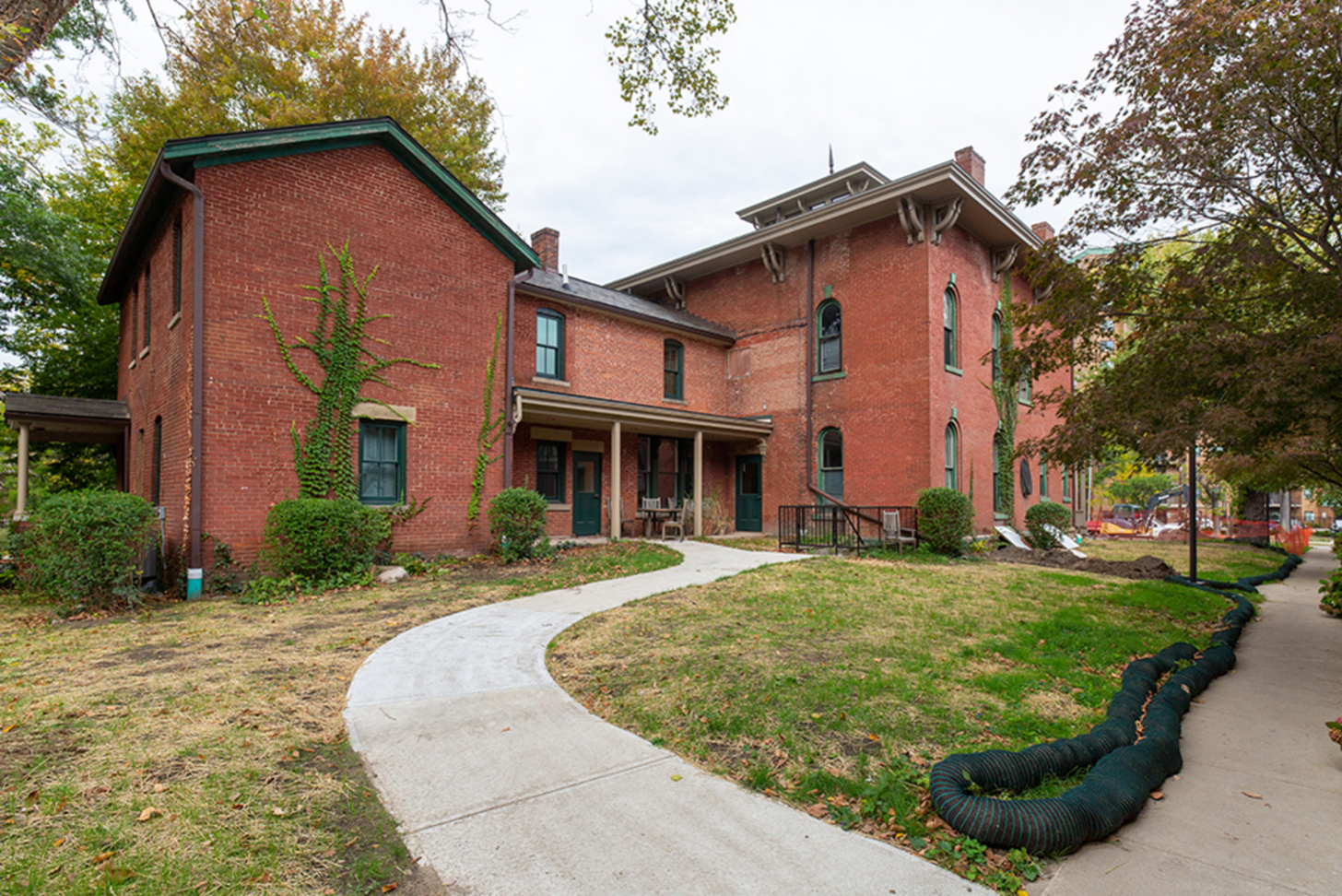 The Cozad-Bates House was built for Justus Cozad by his father Andrew. The oldest section was built in 1853 followed by additions in the 1860s and 1872. The Cozad family first settled in Northeast Ohio in the early 19th century in an area known as East Cleveland Township, located several miles east of Cleveland along the road that became Euclid Avenue.

Members of another family, the Fords, settled along the same road in the same area, in what is now known as University Circle. The Cozads, Fords and other area residents were active in the work of the Underground Railroad, providing aid and safe haven for freedom seekers waiting to travel by boat to Canada.  Cleveland’s code name on the Underground Railroad was “Hope.” While we know that some Cozad family members were active abolitionists, we have no evidence that the Cozad-Bates House was used to shelter freedom seekers.

The Cozad-Bates House became a boarding house in the early 1900s and remained so for decades but sat vacant by the end of the century. University Hospitals donated the home to University Circle Inc. in 2006 for the purpose of saving the dilapidated structure and using the restored space to share the story of the area’s anti-slavery past. That same year, the home was designated a Cleveland Landmark, driven by the efforts of the Cleveland Restoration Society, Council Member Kevin Conwell, and Restore Cleveland Hope.

UCI invested $2 million dollars in the next 15 years to protect and adaptively reuse the property. Beginning in 2021, the first phase of redevelopment will make the most historic portions of the house and the preserved front lawn accessible to the public through an indoor and outdoor interpretive center. The site improvements will also incorporate green infrastructure with support from the Northeast Ohio Regional Sewer District. Together with leading interpretive partner, Western Reserve Historical Society, and long-time community partner, Restore Cleveland Hope, UCI established the Cozad-Bates House Community Advisory Committee, a group of community activists, educators, and historians, to guide development of the Interpretive Center’s content and educational curriculum.

Restore Cleveland Hope retells, promotes and celebrates Cleveland’s Underground Railroad history. They serve as a resource for children and adults to inform and inspire them through educational and cultural programs. They act as a unifying force in the community by providing a venue for open dialogue, reflection, and reconciliation among all freedom-loving people. Restore Cleveland Hope offers classroom educational programs for all ages and also hosts Beloved Community Dialogues to tell stories of those freedom seekers who left and the abolitionists who helped them.

Western Reserve Historical Society inspires people to discover the American experience by exploring the tangible history of Northeast Ohio. The Western Reserve Historical offers the educational program Cleveland Underground: Resistance and Compliance for students grade 6-12. In this program, students will investigate Cleveland’s role in the Underground Railroad and explore issues of personal choice and activism.

Social Justice Institute at Case Western Reserve University strives to create a just world.  They examine the root causes of social injustice and develop innovative solutions by supporting creative research, scholarship, and pedagogy; social justice leaders on and off campus; and relationships within the university and into the community.

Woodland Cemetery Foundation
Woodland Cemetery is the final resting place of many prominent figures from Cleveland’s past, including Sara Lucy Bagby Johnson –  who was the last fugitive slave to be tried in the North under the Fugitive Slave Act before the start of the Civil War.

Request a private tour of the Cozad-Bates House Interpretive Center by filling out the form below. 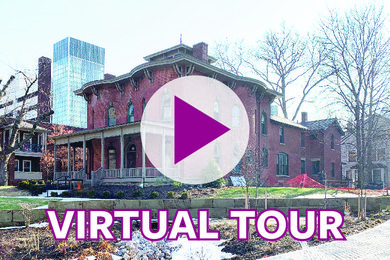 Hours and Operation
The outdoor grounds of the Cozad-Bates House Interpretive Center are open to the public daily from dawn to dusk.

The interior exhibits of the Cozad-Bates House Interpretive Center are open to the public regularly on Saturdays from Noon-4:00 p.m.

Request a private tour by filling out the form at the bottom of this page.

Getting Here
The Cozad-Bates House is within easy walking distance of the Little Italy-University Circle Rapid Station on the RTA Redline rail line, #9 bus route, and the HealthLine. Bike racks are also available on-site.

Limited handicapped spaces are available on-site, with a parking entrance off of Circle Drive. Public visitor parking is also available in the surrounding Uptown District. Mayfield Lot #22 at 11320 Mayfield Rd Cleveland, OH 44106 offers up to 2-hour parking for $3. 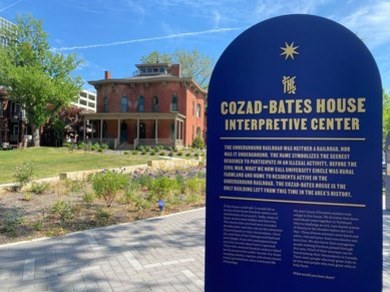 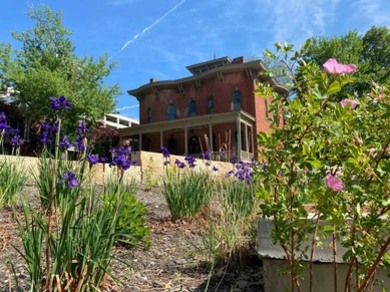 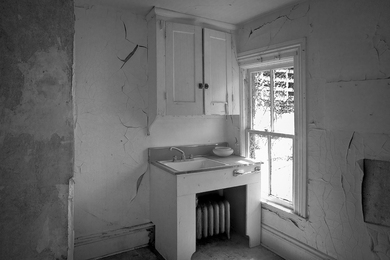 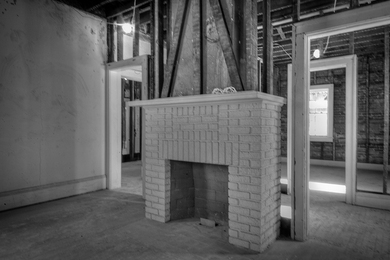 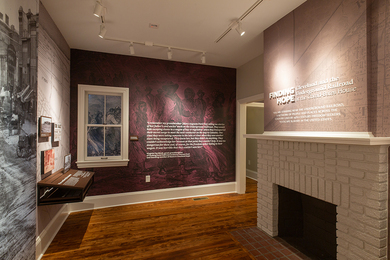 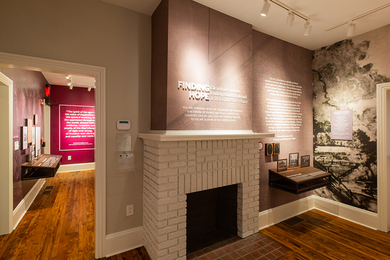 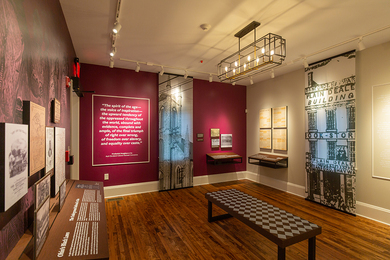 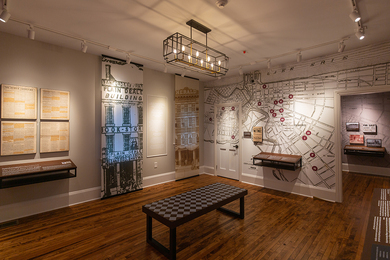 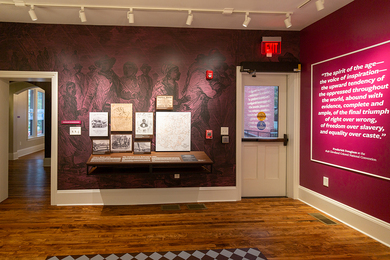 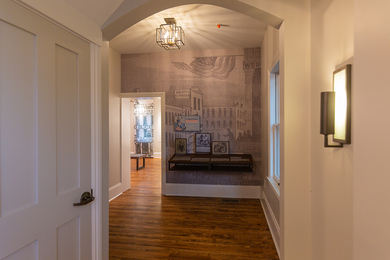 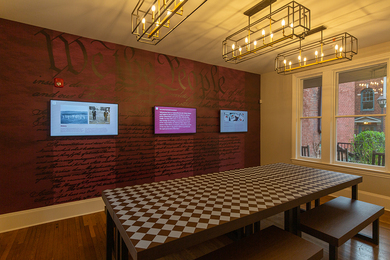 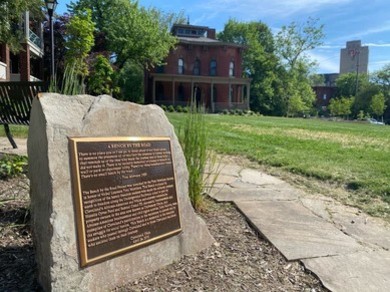 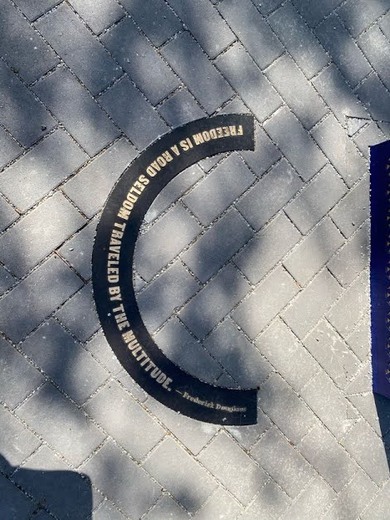